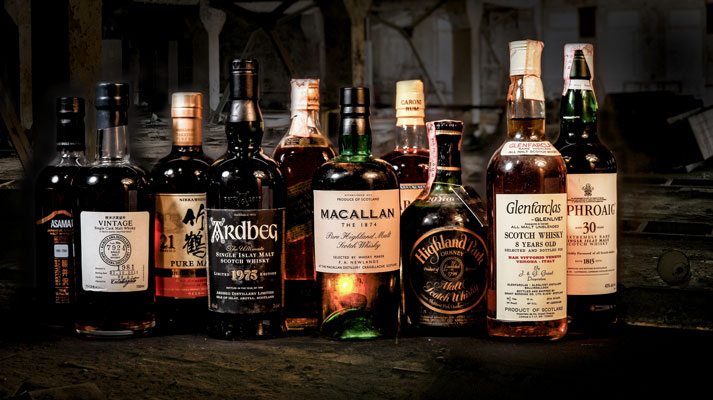 With bottles of whisky, rum, cognac, gin, vodka, and chartreuses, a little over 350 lots have been crafted into the first selection available at Fine Spirits Auction. The first sale will be open until the 11th December. The spirits going under the hammer have been preciously kept by professionals in the sector and private collectors alike, and now is your chance to vie for some veritable treasure.

AN ECLECTIC AND EXHAUSTIVE SELECTION

This first sale is a 360° tour of the world of whisky. All that this spirit stands for in diversity and richness has a place here.

Origins : from Ireland, the birthplace of uisce beatha, passing via Scotland and England to reach Japan, Taiwan, and the United States, all manner of whisky, whiskey, and even New Make (bottles less than three years old) are featured.

Styles and character : Extra Light whiskies for fans of a long drink or a whisky soda; Pure Malts from the 70s, aged where they were made in decades-old sherry barrels, bottled with non-demineralised water with traditional methods (floor maltings, still-heating type, peat extraction, barley variety); Bourbon’s produced in since-closed distilleries, Ryes made at cutting-edge micro-distilleries, Single Malts aged in extreme climate conditions that encourage an exchange between the oak and the distillate.

An experience in time :

More interesting than all of these features, though, is the time period covered by this captivating selection, bringing us closer to the all-important question of how long this alcohol is aged for. What you’ll see in front of you at this auction is over half a century of history, experience, and know-how.

This is a savoir-faire that the whisky industry hasn’t stopped developing since the Second World War, evolving with technological advancements that now allow us such a unique olfactory and taste experience.

But this is also a chance to realise how little our promotion of this kind of alcohol has progressed over time; a chance to reflect on how much the past can be a source of inspiration.

A broad range of lots

In the world of spirits, rarity does not necessarily push prices up. Some of the lots in this auction are particularly rare due to their total disappearance from the market. We have some blended scotch, vodkas, and cognacs that fall exactly into this category. These bottles offer magnificent opportunities for discovery and real collecting potential for fans of a bottle that tells a story.

Perfect to enrich a collection or tempting to our palates, here are some bottles that you might not think of straight away, but that we recommend exploring :

It is very rare to acquire bottles in their original packaging. Beyond the aesthetic appreciation this might inspire, these boxes are superb source of information about the product itself, as well as a stamp of authenticity.

Our selection of other spirits isn’t quite so extensive, but it does include gems from Clements, La Favorite, Caroni, and Foursquare.