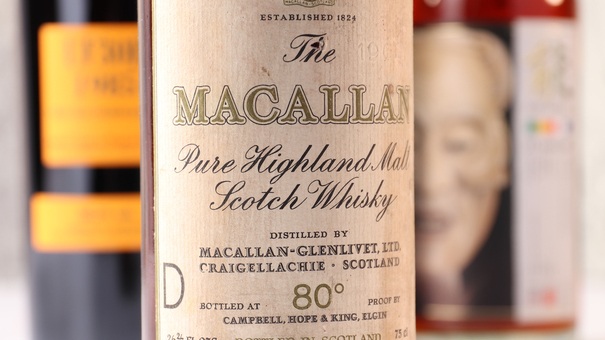 ON A RAZOR’S EDGE

The last moments of an auction are often adrenaline-filled for participants, and that was certainly the case for the second edition of Fine Spirits Auction, which ended on 12 February. Indeed, the fate of many lots in the auction remained undecided until the last five minutes. Some lots were so close that, right up until the last second, bidders had absolutely no idea who would come out on top.

First off, we have to salute the resilience of the Calvados, Armagnac and Cognac category. With only some 50 lots available, it led the auction in terms of sales. Only four lots went without a buyer. The category’s performance was particularly impressive in light of whisky (from all countries in the world) and rum’s historic dominance. While the Petites Champagnes from Guy Lhéraud (Louis XV & Louis XVI) were the subject of a nail-biting bidding war, Frapin and its outstanding Cuvée 1888 decanter was the clear star of the show, fetching a hammer price of €4,600. Frapin was closely followed by Maison Drouin, the specialist in vintage Calvados, with its outstanding 1970 bottling, and, finally, a legendary 2.5 litre Labarthe 1929 Armagnac bottled by Darroze, which went for over €1,000.

This second edition also confirmed the appeal of lots with a more modest value. Whether due to their age or because connoisseurs recognized them as a sound investment, these lots did extremely well at auction and found their “perfect match”. Of the sixty or so lots with lower estimates equal to or below €35, only one went unsold. Among the most sought-after were the Scottish blend The Antiquary De Luxe, the Canadian blend Old Canada and the Scottish single malt Highland Park 18 Year Old 1985.

JAPAN: NIKKA IN ALL ITS FORMS

In any sale, Japanese whiskies are a hotly awaited and highly regarded category, as was reflected in the high number of alerts created. Although Karuizawa and Yamazaki remain the two most popular distilleries, this auction saw Yoichi and Miyagikyo win the jackpot for the number of bids placed and level of hammer prices, all of which were above their upper estimates. These two distilleries, owned by the Nikka group, are a great source of investment, as their potential is still largely underestimated. Three of the distilleries’ rarest and oldest vintages— 1987, 1988 and 1989—all found new homes. To date, the oldest single malt bottled for Yoichi is a 1982 and for Miyagikyo a 1986, which means these 1980s releases represent an important chapter in Nikka’s history. It also means there is still lots of room for manoeuvre for these two distilleries, particularly for this decade, as is shown by their ever-increasing prices.

For Karuizawa, things took an unexpected turn and a 1981 bottling (Karuizawa Cask #136) beat a bottling from 1979 (Karuizawa Cask #8187), despite higher competition for the 1979. As always, Hibiki 21 Year Old was another heavy-hitter.

Islay’s modern and old distilleries who in the early 2000s invested in young malts with a high ABV and very high PPM have seen their bet pay off. Those with a taste for the extreme flock to these exciting limited editions. Not only do they offer great opportunities as collectables with an accessible price tag, but they are an absolute delight to taste. In this respect, Octomore, Ardbeg and Lagavulin kept their promises and were a great success in this second edition of Fine Spirits Auction.

Laphroaig, the untamed and untameable.

Another monster of Islay, Laphroaig! The highly awaited and much sought-after Laphroaig bottlings on the roster attracted huge attention. Only one expression stayed within its estimated price range. The others were quickly snapped up, with a superb battle for the Laphroaig 27 Year Old 1980 Oloroso Sherry Cask, which fetched €4,500. A limited edition of 972 bottles, it was released in 2007 and is a blend of a small number of first-fill sherry casks.

Port Ellen on the rocks

Despite a mouthwatering selection and conservative estimates, peat lovers gave Islay’s star distillery a slight cold shoulder. Against all expectations, Port Ellen and its Diageo Releases were either unable to find buyers or went for low prices. This seems to corroborate observations that the range has been running out of steam since 2015.

Since the range was first launched in 2001, Diageo has been more than a little evasive on the subject of when these Port Ellen Releases will run out, implying there are almost unlimited stocks available despite the distillery closing in 1983. Over the years, as sales prices have risen, the legend of Port Ellen—spearheaded in the late 1990s by two 1978 editions of the Rare Malts Selection—has slightly lost its charm and appeal. Without any clear idea of the future, or rather the end, of this range, collectors have become disheartened. In 2018, in response to this clear loss of interest, Diageo decided for the first time in 17 years to suspend the launch of new releases until further notice. Might it be time to invest?

RUM, A CATEGORY WITH CLOUT

The second edition of Fine Spirits Auction confirmed strong interest in the rum category, with the breakthrough of Caroni and Hampden. For traditional French rums, La Favorite, Depaz, JM and Clément all cemented their solid positions. Only two distilleries—Foursquare and Diplomatico—were unable to find buyers in this auction, but it’s only a matter of time. Although bids generally reflected estimates, they tended to be closer to their higher estimates.

Finally, to close this edition, a few bottlings that particularly stood out:

Find the report of the second fine spirits auction