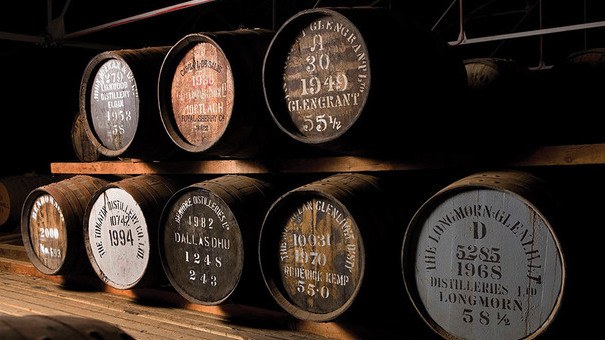 When we talk about the history of single malts a common perception is that they were elusive; obscure until they began to be seriously embraced by their parent companies in the 1980s. Before this - barring a few touchstone moments such as William Grant’s international promotion of Glenfiddich in 1963 - they were seen as fringe products to blends. Peer beneath the surface and this is clearly not the case. There were official bottlings of malts as diverse as Glenlivet, Laphroaig, Glendronach and Talisker as far back as the 1930s and earlier. Malts - bottled ‘unblended’ in their ‘self’ state - have always been an important part of the historical fabric of Scotch Whisky. In fact the road to their current level of reverence and popularity is a far longer and more fascinating one that many would suspect. A road upon which you cannot travel much of a distance without encountering the name Gordon & MacPhail. 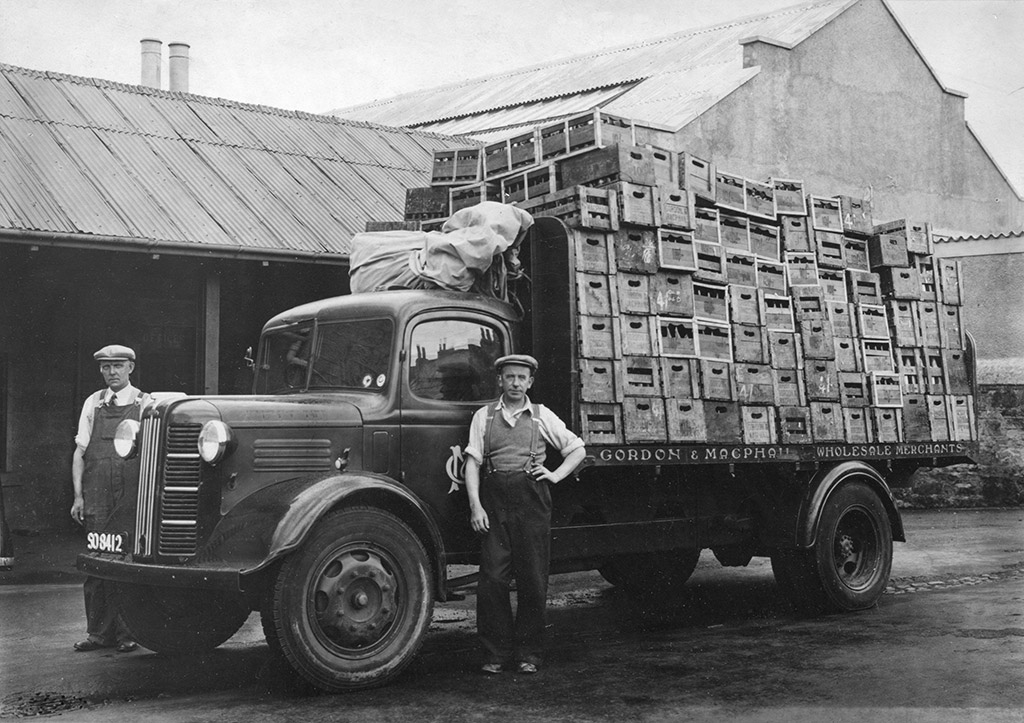 To understand the gentle rise to global adoration of single malts is to understand also the history of Gordon & MacPhail. From simple beginnings as a Grocer, Wine & Spirits merchant in 1895, to their steady emergence over the course of the 20th century as an institution - both cultural and commercial - within the modern whisky world. Right from the beginning they bottled single malts under license from the distilleries. Glen Grant, Macallan, Mortlach, Longmorn and Glenlivet were all bottled in those initial early years according to the company archives. Sadly no known bottlings from these early days are known to have survived - if one emerged the price for such liquid history at auction would be substantial and certainly run into five figures.

This kind of foresight in the practice of bottling, not just blended whisky, but named single malts as well, was far ahead of its time. Other malts had been bottled before but such bottlings in the 19th century were uncommon and often isolated. G&M was one of the first companies - along with Berry Brothers - to bottle numerous named single malts under one company roof. This practice of doing licensed bottlings has continued the entirety of the company’s existence, over the years other names have been added - particularly noteworthy examples being Talisker, Strathisla, Balblair, Old Pulteney and Linkwood. One of the earliest known examples of a G&M licensed bottling is a bottle of 12 year old Mortlach from the 1950s which was sold at Bonhams in 2013 for £625. You can bet that were the same bottle to surface again today it would likely fetch at least double that price.

Perhaps one of the most important innovations from a drinker and collector’s perspective regarding the bottling of whisky was the bottling strength. Traditionally this was 80 proof (45.7%) around the early 20th century, by the 1930s 70 proof (40%) and 75 proof (43%) were both commonly used - although 80 proof remained for many more expensive bottlings. Gordon & MacPhail were pioneers in the practice of higher bottling strengths. As explained by Ian Chapman, Director of Marketing at G&M:

This was perhaps just as important an innovation as the bottling of the numerous malts themselves. The higher strength has attracted collectors and drinkers alike to these older bottlings over the years for two crucial reasons: the whisky is often spectacular and the high strength preserves them immensely well for decades in the bottle. These higher proof bottlings were also smaller batches and less likely to contain caramel - making them pristine examples of some of the greatest malts from their greatest eras of production. These bottlings were not just important for how influential they would prove on the evolution of bottled malt whisky but have retrospectively garnered increasing cultural importance to Scotch Whisky drinkers and collectors as ‘liquid time capsules’ of immense, instructional beauty.

The now famous Connoisseur’s Choice range - of which there are many dedicated collectors - was another important development in the evolution of single malt bottling and appreciation. It marked the first time G&M strayed away from just licensed bottlings and into true ‘independent’ bottling territory. Along with Cadenhead’s and Berry Brothers they were really pioneers in this respect during the 1960s and 1970s. The CASK series was added later in the 1980s and then eventually the multiple various ranges we know today. All have been home to incredible bottlings of quite unique whiskies which are lauded by all serious whisky enthusiasts today. The prices at auction for most of these great bottlings clearly reflect this reverence. Another interesting factor is that for many years the majority of G&M bottlings were released with remarkably cheap and simple packaging, which gives their contemporary value and popularity on the secondary market extra weight and meaning; people pay solely for the liquid with these bottles.

If there is one thing that G&M did, perhaps above all others, that influenced the direction of single malts, it was to seek out and develop new markets and to nurture healthy and lasting relationships with their distributors. The great mind behind this was George Urquhart, he saw the potential, particularly in the Italian market where the taste for Grappa lent itself to younger, vibrant single malts such as Glen Grant 5 year old. It was in these markets that he developed strong relationships with other visionaries like the infamous collector and distributor Edoardo Giaccone. The popularity of single malts spread fast in Italy and helped G&M move into other continental markets as well. Ian Chapman again:

“There was a demand from Europe and USA for single malts in 1920s. This developed in the 1950s, Italian people were used to drinking Grappa and also liked 5 year old single malts. George Urquhart had friends in Italy and started using these connections to supply bottled single malts. Initially 5 years old but then older ages as well. Other European markets took an interest in malts and Gordon & MacPhail then developed these markets building lasting friendships with our distributors.”

From a distributor and collector’s perspective I spoke to Sukhinder Singh from The Whisky Exchange about the same topic:

“George Urquhart was a great man to those who knew him, he loved whisky and was close to his distributors. He both helped them and learnt from them. They were one of the first bottlers to do cask strength whiskies, I believe most of the call for this was also from Italy, from people such as Nadi Fiori who bottled under the Intertrade name. Their foresight to fill in to cask whiskies from distilleries such as Macallan, Mortlach, Glenlivet, Ardbeg, Laphroaig is quite astounding and bottling whisky by vintage only was also a first.”

I asked Sukhinder what his most prized G&M bottling would be and he revealed a small parcel of bottles with ‘securo’ capsules - a seal which dates the bottling accurately to 1962/3 - of G&M bottles for the USA. They include a Macallan 25 year old and all are bottled at 100 US proof (50%). They are amongst the earliest known G&M bottlings still in existence and offer remarkable testament to the foresight and commitment of the company to bottling exceptional single malts quite ahead of their time.

It’s quite true that real appreciation of G&M’s bottlings is something that has only really come to pass in the last 10 years. For many years their prices were not expensive - cheap considering the age and quality of the liquid being bottled. As Sukhinder puts it:

“When you taste the evolution of some of these great whiskies it is an incredible experience. Recently we had a tasting of the new Mortlach 75 year old which was distilled in the late 1930s, we also tried a similar vintage but bottled in the 1970s and a 12 year old bottled in the 1970s. All three whiskies were outstanding, even the 75 year old. For far too long these old vintages from G&M were way too under rated, probably because they were reasonably priced.”

Today they remain one of the few companies with an immense catalogue of aged stock and it looks like there will be little shortage of legendary bottlings in the future. Ask collector’s now about their favourite or most desirable bottles from G&M’s back catalogue and you’ll get myriad responses. Many talk about the pre-war and wartime vintages from great distilleries such as Macallan, Glen Grant, Strathisla and Mortlach which were bottled in a steady stream from the 1960s - 1990s. Others - myself included - would opt for utterly incredible examples of Laphroaig and Port Ellen bottled at cask strength in the 1980s for importers such as Intertrade or Donini.

It’s easy to overlook, but what this constant stream of great bottlings created, along with the strive to engage with new markets in Europe and the USA, was a slow burning boost in the popularity of single malts. Not everything G&M did was perfect, many of us lament the lower ABV or use of caramel which blighted many of the Connoisseur’s Choice releases for years. But the cumulative effect of their output and diversity played a hugely important role in the popularisation of single malts among a wider audience. Without them would we have had the explosion of independent bottlers in the 1990s and 2000s? Or the efforts of the main companies to promote single malts in the late 1980s? There were other factors at play but G&M’s importance and influence cannot be overlooked.