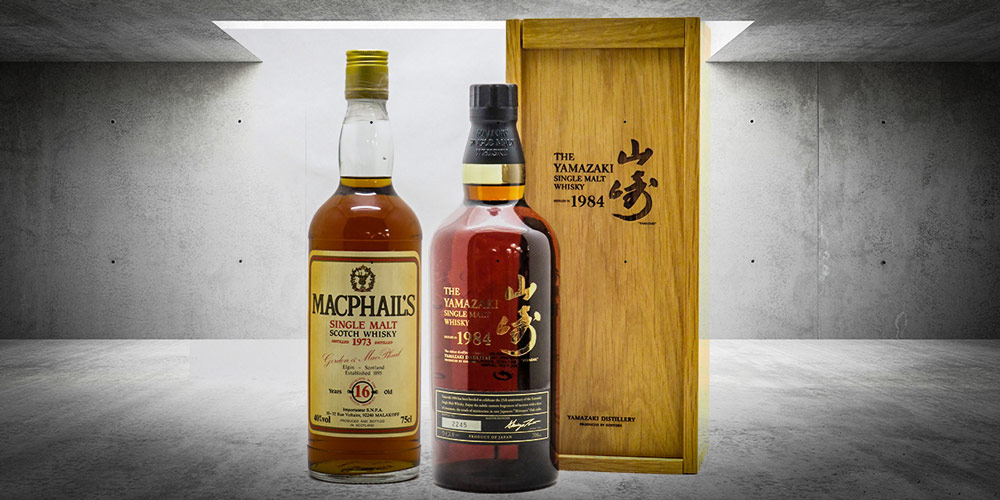 SPIRITS OF THE MOMENT

The 20th November 2020 saw the opening of our first auction at Fine Spirits Auction, an online platform dedicated to the world of spirits, created by two of France’s leaders in the Drinks Business: iDealwine (a top online wine auctioneer) and La Maison du Whisky (whisky and spirits specialist in Europe).

Those of us who followed this first auction watched it unfold like a stage of the Tour de France. After a gentle start with all the participants sticking close to the rest, there were some outstanding breakaways at the approach to the finish line.

The surprise of this auction came from a 16-Year MacPhail single malt from 1973. This bottle gets a special mention for the number of bids it received – 23 – in a tie with a 20-Year Glen Scotia 1991 from Wilson & Morgan

Out of just over 360 lots put up for auction, no fewer than 55 were from Japan. And only 5 of these failed to find a buyer. This is a category coveted more than ever by collectors. These are products that inspire confidence in sellers and buyers alike, since they have great potential for gaining value on the one hand, and are unlikely to see that value drop on the other. This is attested by some of the products recently introduced to the market which, although still available from some professional sellers, have already been spotted at auction. Whilst the pull towards Japanese whisky is undeniable, this doesn’t necessarily mean a systematic soaring of value, and 50% of the lots were sold at their estimate.

Another spirit usually classed as a safe investment is rum. Two distilleries, two styles, and two production methods came to the fore in this first auction: La Favorite for French-style rum, and Caroni for the English camp.

Out of the 26 lots up for auction, ten represented France and the best of agricultural rum: Neisson, Clément, La Favorite, Karukera, and Bielle. La Favorite was indeed the favourite, both in terms of price reached and number of bids received: the 1988 La Flibuste went for €767 with over 20 bids placed between two vintages.

As for the English-style rums, ten bottles were put up for auction and we saw the dominance of Caroni. We should also note that the Foursquare distillery from Barbados is one to follow, following close in the footsteps of Caroni.

With over 220 lots in this auction, Scotland remains the main purveyor of opportunities when it comes to spirits both for collecting and tasting. We’ll first take a look at the different malt blends and then the distilleries that came out on top!

Unsurprisingly, blends and blended malts trailed behind their peers somewhat, despite the success of certain gems like the the 10-Year Dalvegan and the 8-Year C&J MacDonald’s. But why are these blends less desirable? In general, there’s an over-abundance of this category, as well as a misunderstanding of the product and some negative preconceptions. But those who wished to bid have found themselves the owners of some olfactory and sensory delights. Compass Box, represented by its Hedonism whisky, stands out from the crowd somewhat with a spirit that has real collectors’ potential.

There were no surprises, either, in the top five distilleries by value sold: The Macallan, Port Ellen, Highland Park, Brora, and Glenmorangie, confirmed for the first two by merchant versions from Gordon & MacPhail, Hunter Laing, and Signatory Vintage. There was an equal distribution of lots between the Highlands, Speyside, and Islay.

The US is a high performer and the domination of Van Winkle shows no signs of letting up. French whisky from Domaine des Hautes Glaces and Michel Couvreur made a strong appearance, too. Only whiskey from Ireland and Taiwan remains somewhat in the background.

COGNAC AND OTHER SPIRITS

The cognac category flatlined in this first sale, not performing quite as it should have done, likely due to high starting prices and strong competition from other end-of-year auctions. Sales of gin and vodka, stumbling out of the starting blocks, should slowly but surely find their audience. But, to finish on a positive note, Chartreuse is clearly coveted!

Find the report of the first Fine Spirits Auction