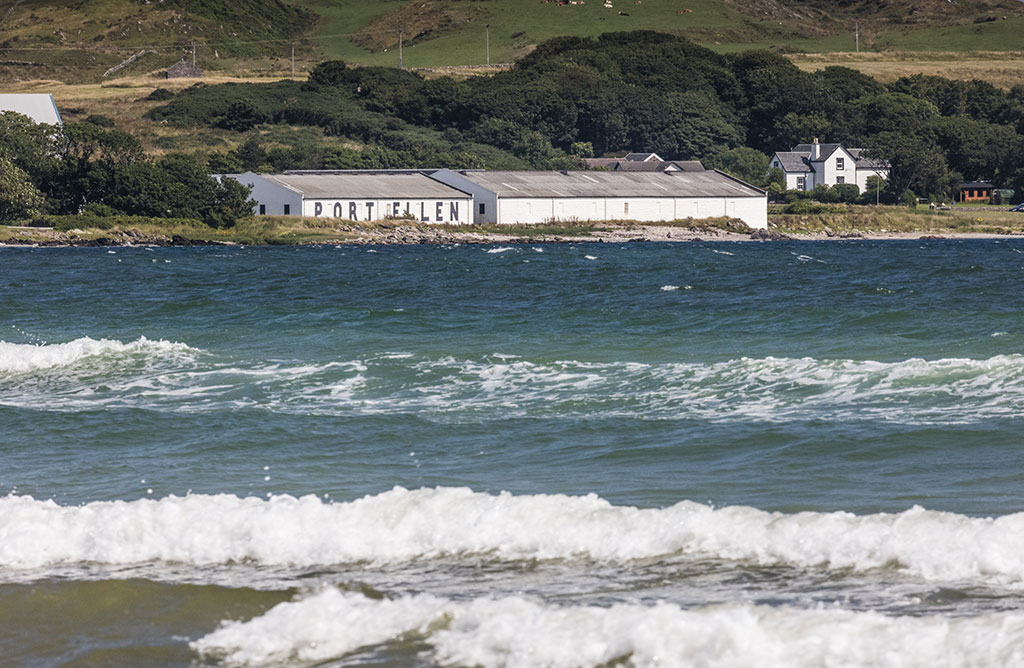 Founded around 1824/25 the distillery flourished under the ownership of John Ramsay and his family successors. Some of the earliest trials of prototype spirit safes were carried out here at that time by the inventor James Fox, leading to the claim that Port Ellen was the first distillery in Scotland to install such an apparatus. Fox’s claim was disputed by others, however, particularly after he was awarded the then huge sum of £4,000 by the Excise for his ‘invention’.

By the 1860s Port Ellen was already being exported to the United States. Most probably, this was as full casks, shipped unaged and aged, reduced and often adulterated locally by wholesalers and retailers. Most of this whisky was consumed was with hot water and sugar or in hot punches though Port Ellen is said to have had a superior reputation.

The distillery was evidently still at the forefront of technical innovation at the end of the nineteenth century, as recorded by J. Scarisbrick of the Inland Revenue in his text Spirit Assaying.

In 1920, it was sold to a joint venture between Dewar’s and Buchanan’s and was subsequently acquired by the Distillers Company Ltd in 1925. It was closed between 1930 and 1967 but then re-opened with 4 operating stills, supplying almost exclusively for blending. It was permanently shut in 1983.

Releases: For most of its life the vast majority of Port Ellen’s output was intended for blending and, so far as is known, filled to re-fill casks which may account for its apparent ability to sustain extended aging, as seen in the Special Releases series.

There was only one official release prior to the 1983 closure, that being the very limited Queen’s Visit bottling (see main text for details). However, as many casks were held by merchants, there have been well over 400 third-party bottlings in recent years.

There have been 17 official bottlings in Diageo’s Special Releases series. Recently, Diageo announced that the latest Johnnie Walker Blue Label Ghost & Rare edition will contain Port Ellen in the blend. This is expected to be available from October at a RSP of £275.

Revival: Diageo announced in October 2017 that, subject to planning permission, a revived distillery based on the original plans would open by 2020. Up to 800,000 litres of alcohol will be produced annually, making this one of the company’s smaller operations. Georgie Crawford, previously manager at Lagavulin has been appointed as Project Implementation Manager, responsible for bringing Port Ellen Distillery back into production 35 years after it closed.

There is currently no visitor access to the site, though it is possible to walk onto the foreshore by the original warehouses.

“The first 500 bottles are easy, it’s the last six that are impossible!”

So says Jon Beach, proprietor of Fiddler’s Highland Restaurant on the shores of Loch Ness and a well-known lover of this iconic Islay distillery.

It’s surrounded by so many myths and legends that it may be worth re-stating a few key facts. The distillery was opened in 1824 and, after the changes in ownership usual during the nineteenth century, was eventually absorbed by the Distillers Company Limited (fore-runner of today’s Diageo) in 1925. It was silent between 1930 and 1967; then, after a brief period of working, it closed permanently in 1983.

For quite a long time after that, no one particularly cared. The peated Islay style was not fashionable and blenders required only tiny quantities; Port Ellen’s output had gone almost exclusively into the DCL/Diageo blends and, bluntly, the distillery wasn’t really missed. With only one official bottling during the years of production (the desperately rare Queen’s Visit 12 Years Old from August 1980 – one of the legendary ‘last six’ that collectors yearn for, and probably now a £15,000 bottle) interest in Port Ellen only began to build from 2001 with the launch of the Diageo Special Releases series.

At first, those prices were thought high. More than £100 was seen as a super-premium price, especially for an obscure distillery. How things have changed – one well-known UK specialist today offers the 1st Release bottle at £4,500! Even the most recent bottles in this series will cost over £2,500. Since 2012, Diageo’s approach to pricing has attracted some criticism but, in fairness, all they have done is followed the secondary market and taken a profit that otherwise had gone to speculators.

Andy Simpson of RareWhisky101.com maintains a Port Ellen index, recording the movement of prices over time. As he says, “the Port Ellen index is still outperforming the broader market. Over the same time-frame, the broadest measure of the rare whisky market, the Apex1,000 Index is up 12.43%, whereas the Port Ellen Index is up 16.93%. Its appeal to all three buyer-types; connoisseurs, collectors and investors is clearly still evident”.

Incidentally, all this information is available free of charge on the RareWhisky101 website, along with their Annual Reports, which contain a wealth of information, detail and commentary of interest to any whisky collector or investor.

However, whatever the prospects for the Port Ellen bottles in the marketplace (and they would appear to be positive) the most exciting news regarding the distillery is that it is to be re-opened. After years of denying that Port Ellen would ever work again, Diageo stunned the world of whisky in October 2017 by announcing that, along with the equally renowned Brora distillery, around £35m will be spent to refurbish and refit the two sites.

The aim is to restart distilling by 2020 though a quick calculation suggests that it will be at least 2032 before the first whisky is bottled, Diageo having suggested that a 12 Years old release is in their current plans. But as anyone who has visited the site will know, this will require an enormous amount of work. In fact, a new building will be constructed in the courtyard between the maltings and the old warehouses, and a pair of new stills and condensers built and installed. Diageo says it has detailed drawings and records of the old equipment to help this process, with the ambition to recreate what was made in the late 1970s and early 1980s, though with the benefit of significantly greater appreciation of maturation techniques. Around 800,000 litres of alcohol will be produced when the new Port Ellen is in full production, rather less than half of the capacity of the old distillery when it was working to capacity.

Naturally, there will be visitor facilities as Diageo seek to create a brand for a long-term future. But will the value of the existing bottles be damaged? Most commentators think not and that, in fact, this announcement can only increase interest and demand for these expressions. According to Andy Simpson, news of the re-opening “has had little effect on price movement. Bottles from Port Ellen have regularly out-performed the broader market and they [Diageo] appear to want to maintain the status quo… that being a general increase in values”.

As one might expect, the potential impact was carefully considered by Diageo in their investment decision and we may be sure that they themselves are extremely confident of future trends. So, the future looks bright for Port Ellen, marking a remarkable turnaround in its fortunes.

Once little regarded, closed and approaching dereliction Port Ellen now stands higher in its reputation than ever in its near-200 year history. For many single malt enthusiasts it is their ultimate bucket-list dram and a visit to the site a highpoint of any trip to Islay; truly, this is an unprecedented regeneration and a mark of the remarkable strength of the current whisky market.

Let us hope that it enjoys a long and happy new lease of life.