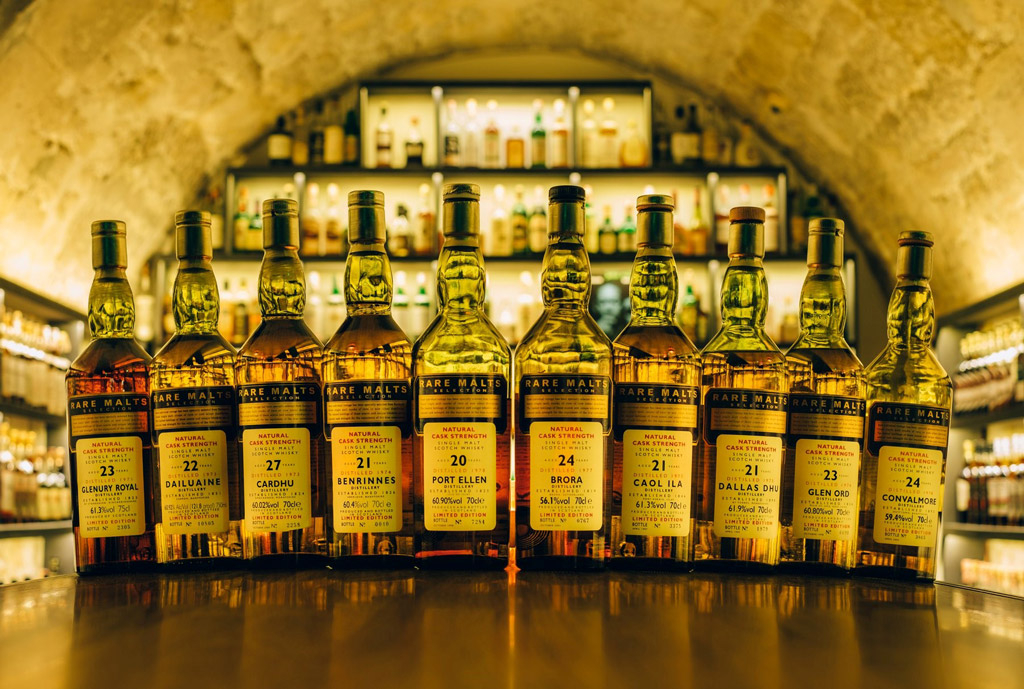 The 2016 edition of Whisky Live Shanghai saw an announcement that shook the microcosm of collectors of the Rare Malts Selection. Three new bottlings in a limited edition of just five bottles each worldwide were produced to mark the occasion, including two distilleries not found in the original selection, Lagavulin and Talisker. While collectors were initially outraged and shocked by the news, this epiphenomenon helped return to the spotlight a forgotten range which in its time played a key role in promoting the single malts category and inspired the future development of premium and super-premium versions of the Diageo group’s malts.

At the turn of the 1990s, United Distillers (Diageo’s predecessor) found itself at the head of a portfolio of some 50 malt distilleries. Although many production units closed between 1983 and 1985, United Distillers remained the largest player in the Scotch whisky industry. It inherited this position from the first attempts to rationalize an industry which, from the mid-19th century, found itself in the clutches of a rampant overproduction crisis.

Background : Faced with the failure of various associations created with the aim of containing the abundance of grain whisky (required to produce blends) flooding the market, several independent distillers grouped together in 1877 to form Distillers Company Limited (DCL). From the end of the 19th century and throughout the 20th century, DCL continually increased its hold in a divided industry that was beginning to buckle under the strain of various political, economic and social events.

On the eve of the First World War, and at the initiative of DCL’s directors, the Scottish Malt Distilleries (SMD) was formed. Like the initiatives taken to control the production of grain whisky in 1877, it was now time for major changes to be made to malt whisky production to ensure its survival in extremely challenging circumstances. Launched in 1914, this grass-roots movement made the most of the consequences of WWI and the closure of the American market when the Volstead Act was announced in 1919. In the mid-1930s, SMD was responsible for 51 malt distilleries. 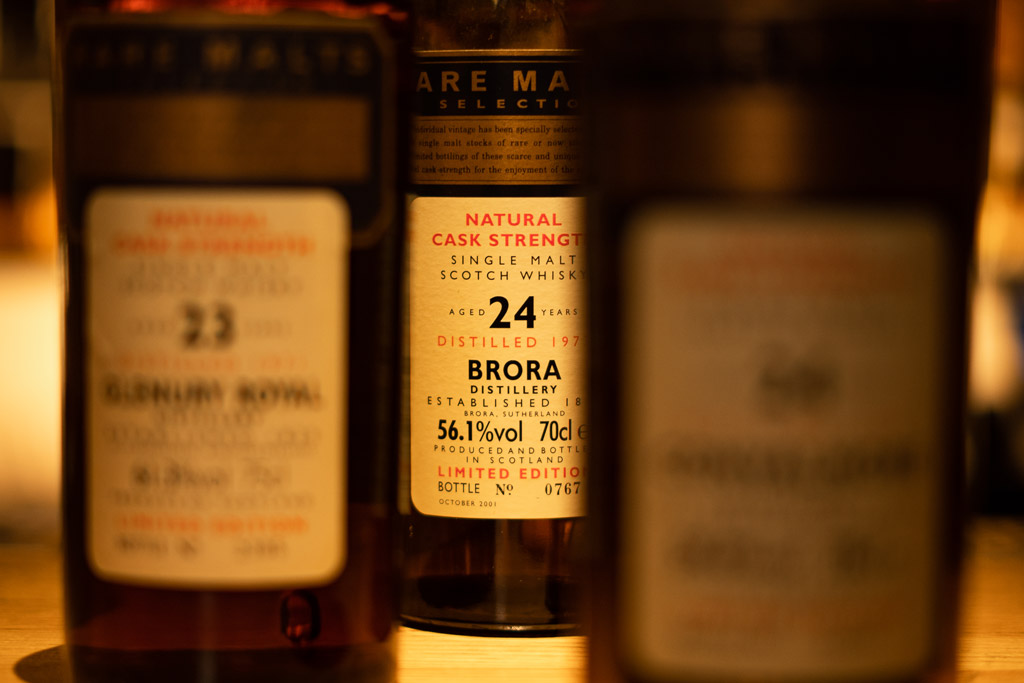 Established in 1987 after Arthur Bell & Sons (1985) and DCL (1986) bought the Guinness group, United Distillers (UD) immediately set out a new communications and marketing programme for their malt distilleries. Two axes were developed in parallel to one another. The first focused on the different regions of Scotland and saw the creation of the Classic Malts range, starring the six distilleries of Glenkinchie, Oban, Cragganmore, Talisker, Lagavulin and Dalwhinnie. The second—a more exclusive and niche enterprise—showcased the 36 distilleries in the portfolio, half of which had closed in the early 1980s, leaving behind a significant stock still undergoing maturation.

This now iconic range was created by the dynamic duo of Mike Collins, Marketing Director for UD and creator of Johnnie Walker Blue and Green and the Six Classic Malts range, and Maureen Robinson, the group’s Master Blender.

A RANGE WITH SPIRIT

The disruptive and innovative nature of the Rare Malts Selection led it to be launched first in the duty free market in 1995 before then being introduced to domestic markets. The bet paid off. In the 1970s, markets were saturated with obscurely named Scottish blends of increasingly questionable quality. The ongoing price war was further intensified by general alignment on the lowest ABV permitted by law of 40%, which allowed companies to pay the lowest taxes possible (VAT, excise tax and, for France from the 1980s, social security contributions). The 1980s economic crisis did little to help the situation and premiumization of the market seemed an ever more distant dream.

In this context, the launch of the Rare Malts Selection came in complete antithesis to market indicators. It focused on micro batches created by marrying some 20 barrels capable of producing 4,000 to over 10,000 bottles per release.

Traceability was the key concept in the range. Casks were selected from a single year of distillation and bottled at cask strength, without the addition of colouring (E150), and without chill-filtration—an artisanal practice until then used only by independent bottlers. The only drawback was that, although bottles were individually numbered, there was no mention of the exact number of bottles produced in each batch. As the range developed, so too did the information provided and their presentation. Some editions stated the month and year of bottling at the bottom of the label. Although the range was initially launched in a midnight blue case, some markets, like the Netherlands, required a wooden box, and others sold the bottles without cases. Special statements notably appeared on versions for the United States (“USA”) and South Africa (“RSA/B297”) in order to meet the requirements of import countries. In this way, the Rare Malts Selection introduced the concept of bespoke bottlings that would become the norm for luxury goods 20 years later. 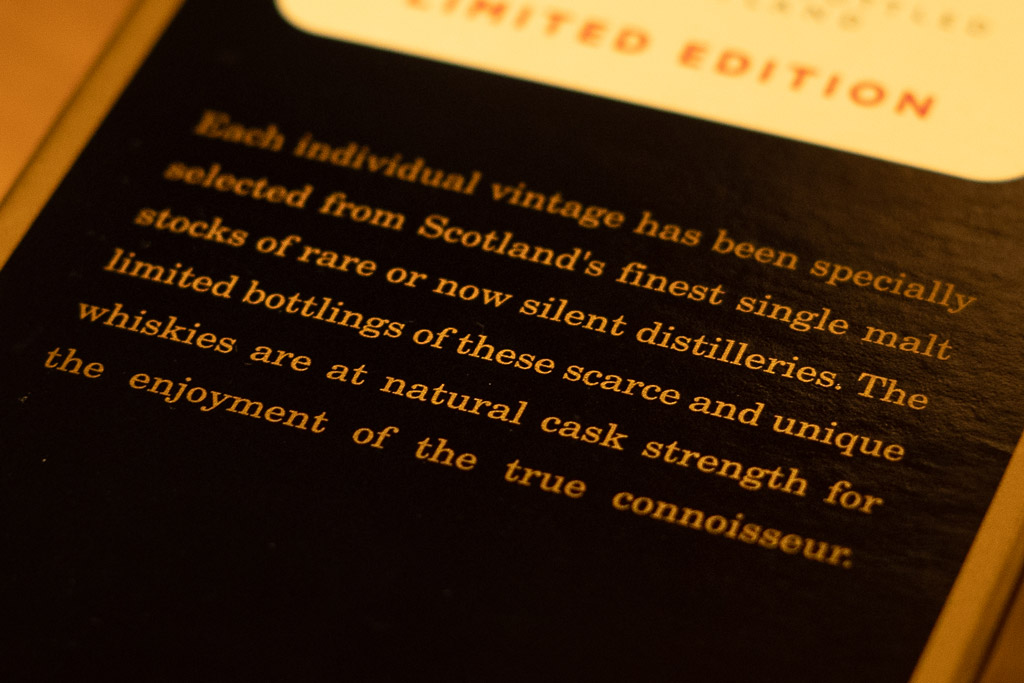 In the late 1970s, it was decided that whisky should be transferred to cask at 63.5% ABV. At 63.5%, spirits age more evenly and faster than they would at 70% or 75% (the degree at which spirit leaves the still) as there is more interaction between the wood and the alcohol.

Although no official rule existed before, it was standard practice for the largest companies to maximize storage space and the number of barrels requiring handling (which generated significant overheads) by filling casks with a spirit at almost the same degree at which it left the still.

Of the 55 bottlings released in the Rare Malts Selection between 1955 and 1996, over half were at 60% - 65% ABV. All had been distilled between 1969 and 1975 and were on average over 22 years old. This combination of high alcohol and aged whisky is no longer possible, as only young whiskies aged around six years are still able to come close to 60% ABV. This makes the Rare Malts Selection a stunning reflection of the era. In addition to their ages and ABVs, the profiles of these malts also illustrate a production process no longer found. When tasted, the malts are much more taught, some even closed, and need to be allowed to breathe. From an organoleptic perspective, many seem young for their age. They are also very sensitive to evaporation and, if handled too much or stored in suboptimal conditions, the fill level tends to drop quickly. Ideally, when storing these bottles, the entire capsule should be covered in parafilm (stretchy medical tape) to limit the loss of alcohol and maintain the bottle’s value.

STANDING THE TEST OF TIME

During the first four years of its launch (1995-1998), bottlings were released in two waves every year and featured some four to ten different distilleries. The first two years were rich in terms of both the number of releases and the distilleries represented. In 1995, 13 were showcased in 35 bottlings. The top of the table was widely dominated by the two giants that have since become Brora and Clynelish, between them offering no less than eight different versions all distilled in 1972. These editions were the most popular in the Rare Malts Selection.

In 1996, 15 distilleries won fame in 19 new bottlings. For some of these, this would be their only appearance in the range (Craigellachie, Benrinnes, Aultmore, etc.). In addition to promoting this range, UDV parted ways with various production units deemed no longer strategic, such as Benrinnes in 1992, Bladnoch in 1993, Aultmore, Craigellachie, and Royal Brackla in 1998.

As well as the number of distilleries and quantity of bottlings offered, these two years also cover a period of production at the turn of the 1970s that was pivotal for many distilleries. The early 1970s were marked in the industry by a wave of unprecedented modernization initiatives that affected all professions. In 1972, for example, Glendullan opened a new production unit under its pagoda roof equipped with cutting edge technology that operated in conjunction with the old distillery until 1985. This technological revolution was coupled with a noticeable improvement in the quality of malts. Their aromatic profiles transformed, a clear break had been made in the production of many distilleries. There was now a “before” and “after”. 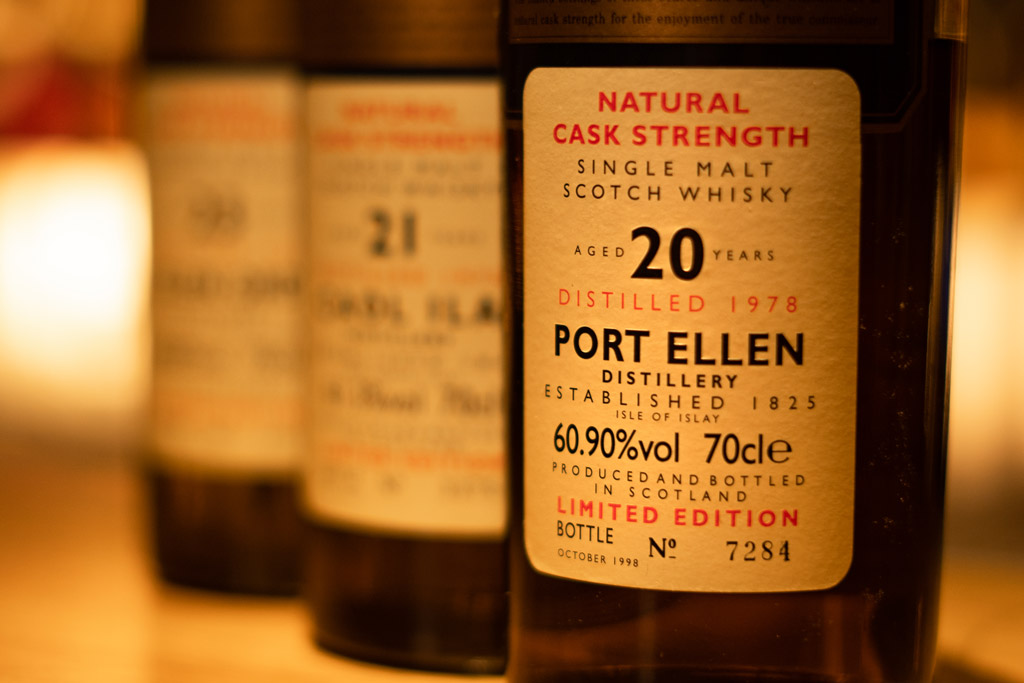 Whether due to the success of the Six Classic Malts—launched in 1988 and released in the Distillers Edition in the mid-1990s—or due to changes in the team responsible for the Rare Malts Selection, 1999 saw a major slowdown in the launch of new editions. Only four or five bottlings were released per year until 2005, when the Rare Malts Selection was finally brought to a close. In the meantime, the Scotch whisky industry had recovered from a 15-year crisis and changed profoundly. New distilleries had opened. Others had reopened and been the subject of major renovation and investment. The first five years of the new millennium saw a huge number of distilleries change hands. The established structure of the industry had been broken apart and new independent players, including independent bottlers, had joined the restricted clan of distillery owners. In the ten years the Rare Malts Selection existed (1995 - 2005), the Scotch whisky industry had been completely reinvented.

On the eve of the 2008 crisis, the market for premium and super premium malts was going strong. The spirit of the Rare Malts Selection was being emulated within the industry. Small batch, cask strength and non chillfiltered bottlings without added colouring became the norm for any distillery aspiring to prosperity.

Within the same portfolio of Diageo distilleries, the Rare Malts Selection made a name for new talents until then thought of as “blend malts” and new legends were written. Caol Ila and Clynelish, for example, were each given their own range and released in different ages and versions. Surfing on the trend for rarity, Diageo launched a series in 2001 dubbed Diageo Special Release, spearheaded by Port Ellen and Brora, both of which had closed permanently in 1983 and since entered the pantheon of collectables considered safe investments for any investor-collector. 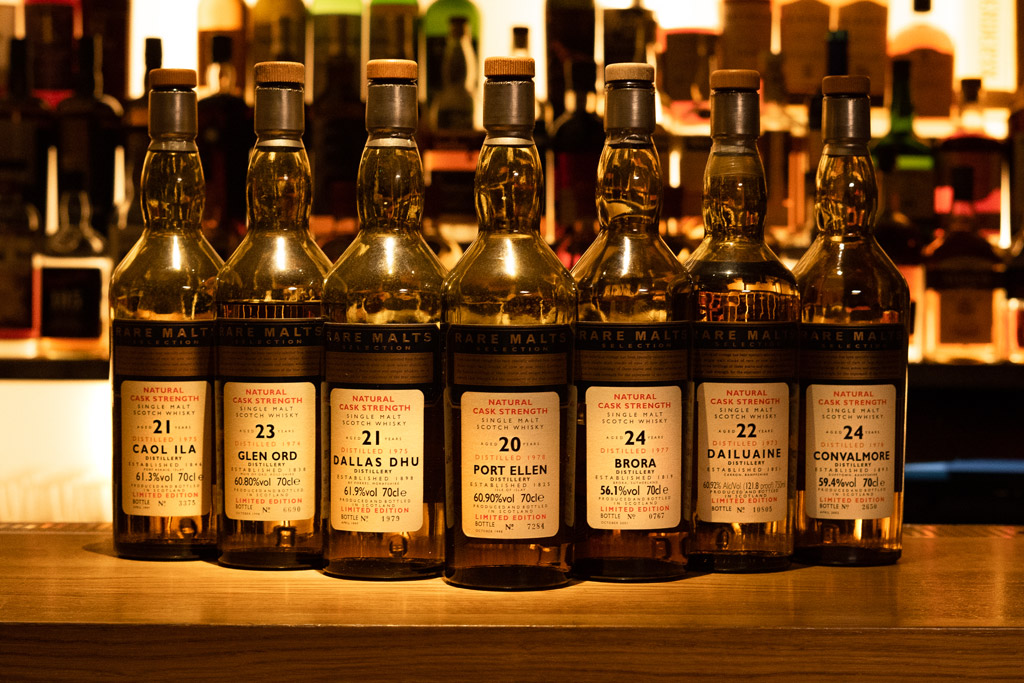