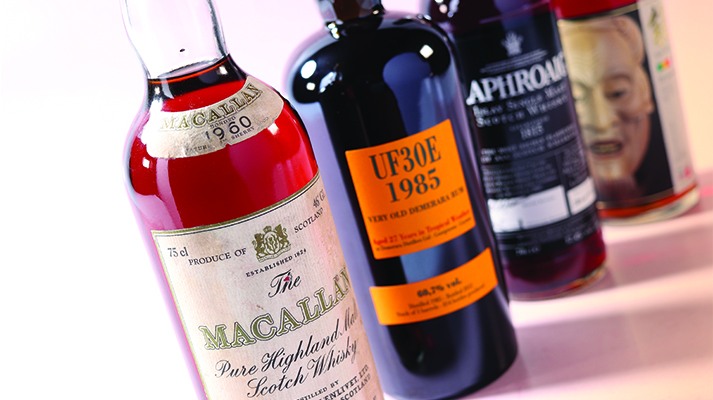 This second edition of Fine Spirits Auction gives pride of place to the world’s greatest producers.

Scotland and Japan’s leading distilleries appear alongside the finest French cognac and Calvados producers, while the category of Trinidad and “Demerara” rum continues to write new chapters in its legendary history.

ISLAY IN THE NEW MILLENNIUM

Ardbeg, Lagavulin, Port Ellen, Octomore, Bruichladdich and Laphroaig... the peated malts of this unique island will be in the spotlight with a selection that gives pride of place to 21st century releases from distilleries over 100 years old.

Ardbeg stands out for its no-age statement limited editions— Galileo, Ardbog, Auriverdes, Kelpie, Perpetuum and Supernova—all fresh from distillations completed in the pivotal period at the turn of the millennium under the aegis of the MacDonald family and then the LVMH group.

Lagavulin returns to its 12 year olds. An age that, in the 1970s, gave it its best years. It was a limited edition dubbed Special Release, bottled at a high ABV, that first appeared in 2002, quickly going on to become an annual event for all collectors of this legendary distillery.

After closing in 1983, Port Ellen rose from its ashes in 2001 and celebrated the arrival of the new millennium by opening its vaults. It was then that it began writing the greatest chapter in its history as part of the Diageo Special Release range. This saga, which is still being written, now boasts 17 chapters. Three are available in this first edition of Fine Spirits Auction #2021.

Octomore is distilled at the Bruichladdich distillery and the peated alter ego of the eponymous single malt. It is the archetypal single malt of the new millennium—experimental and small batch, with a particular focus on the traceability of its raw ingredients, barley, peat and water. A malt that immediately became a hit among a new generation of collectors.

EXCELLENCE MADE IN JAPAN

Despite the very small number of distilleries in operation in the country, the Japanese whisky category is one of the most popular in the collection. From Yoichi to Miyagikyo, Kawasaki and Karuizawa, the 1980s are given pride of place through a selection of single casks, limited editions and anniversary releases. Expressions with solid reputations for both malts and blends, with France a favourite market for the supply and distribution of these “made in Japan” whiskies in the late 1990s.

FINE SPIRITS WORTH THEIR WEIGHT IN GOLD

Whether from Scotland, Japan or the United States, the first selection of the year features extremely rare bottlings from the past, such as The Macallan 1960, distributed in France in the mid-1970s, the Karuizawa 1979, bottled for the French market, a Highland Park 1978 and a Laphroaig 1980.

As well as these gems, various independent bottlings stand out for their rare and exclusive nature, like the Strathisla 1968 G&M Private Bottling for Singapore, the Springbank 1969 bottled by Signatory Vintage and the Pluscarden 1961 from Silver Seal. Pluscarden itself is in fact the nom de plume for a first-fill sherry cask from the exclusive distillery Miltonduff.

FROM CALVADOS TO TRINIDAD

The “other fine spirits” category is led by two genuine behemoths. The family-owned Calvados producer Maison Drouin on the one hand, with three vintages from 1967, 1968 and 1970 bottled in the early 1990s, and on the other the Caroni distillery (the “Karuizawa of rum”), which closed in 2002 and never fails to draw a crowd at any auction.