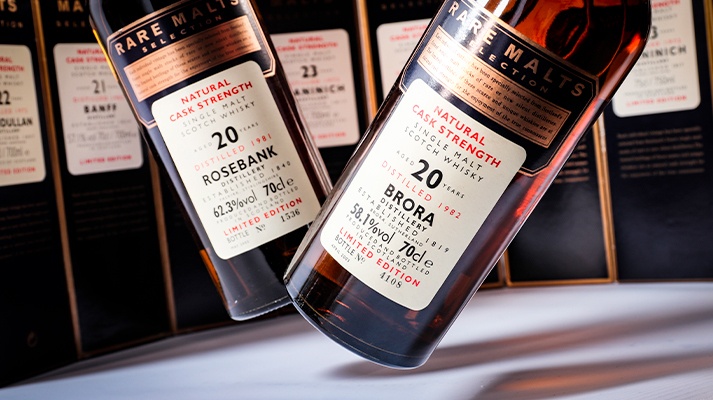 France has always been a key historic market and in recent decades has stood out for its taste in all types of spirits. Whether imported or produced locally, the French have proven themselves to be a versatile and curious people. This curiosity is stoked by a vast range of products offered by independent bottlers and producers keen to respond to this high and discerning demand. This abundance has created a market for collector’s bottles that now feeds our auctions.

The third edition of Fine Spirits Auction pays testimony to this vigour and features extremely rare bottlings from highly regarded distilleries, including The Macallan 1938, Glenury Royal 50 Year Old 1953, Yamazaki 1993 The Elephant, Diamond 1981, Karuizawa Kamiasobi 1977 and 1983 White Warrior, Glendronach 1972 Cask 713 and the vintage series of Francis Darroze bottlings, including the outstanding 1946.
We would therefore like to say a huge thank you not only to the professional and private suppliers of these lots for the trust they have placed in us since the launch of Fines Spirits Auction but also to our increasingly active bidders whose interest continues to grow.

Happy bidding and may the best price win!

DARROSE vs FRAPIN, ARMAGNAC vs COGNAC

The next few days will see an epic battle of the Franco-French titans! Between Francis (Darroze) and François Rabelais (Frapin), it’s all a matter of taste, a meeting a few centuries apart between the specialities of the Landes and Charente regions. Darroze offers three estates and vintages: Mahu 1946, Laburthe 1976 and Busquet 1961. For Frapin, the VIP XO Premier Cru is given pride of place.

SPOTLIGHT ON THE DIAGEO RELEASES

The world leader in spirits, Diageo has never failed to create a buzz with its many malt distilleries and Annual Special Releases. On the menu this edition are Brora, Clynelish, Cragganmore, Dalwhinnie, Glen Elgin, Glen Ord, Glenkinchie, Knockando, Lagavulin, Mortlach, Oban, Port Ellen, Royal Lochnagar and Talisker. An interest in outstanding whiskies that are also a particular type of rare will lead you to Glenury Royal 1953, Talisker 25 Year Old, Oban 1969, Glen Ord 30 Year Old and Cragganmore 1973. All in all, this is a collection of extremely heavy hitters!

JAPAN IN ALL ITS FORMS

As the Japan Spirits and Liqueurs Makers Association lays the foundations for its new production charter designed to protect 100% Japanese alcohol and the term “Japanese Whisky”, we reveal a collection that offers an excellent though non-exhaustive overview of what is possible when it comes to blends and pure malts in the Land of the Rising Sun. From well-known brands like Hibiki and Taketsuru to more niche players like Kaiji, Hatozaki, Kura, Ko-Shu and many more.

Producers and independent bottlers come together to create a new stop! Although Caroni (closed since 2002, Trinidad) and Diplomatico (Habitation Botucal, Venezuela) make up the majority of the rum contingent in this edition represented in outstanding bottlings like Caroni 1974 Bristol and Diplomatic 2000 Sherry Cask, Italian independent bottlers such as Rum Nation - Rossi, Samaroli and Velier are once again causing a stir with several rare bottlings, including Albion 1994, Uitvlugt 1997 and Diamond 1981!

STARTING A COLLECTION WITH FSA#3

Don’t know where to start?
There are several lots available for the themes below which would all help you get a foot on the ladder.
A difficulty level is provided purely as a guideline based on the price/availability ratio of bottles and indicates how easy they might be to collect, with 5/5 being the most difficult.

(Difficulty level: 4/5)
Ernesto Mainardi, the man behind this independent bottler, is a colourful character who, in the late 1970s, became an importer for Gordon & MacPhail in Italy. This gave him access to a large number of barrels, which he used to develop his own labels for the import company Sestante. Although his bottlings of Bowmore 1965, 1971 and 1973 have now entered posterity, a number of his bottlings remain less well-known and are still available, although increasingly rare. Two of these are found in this auction: a Pulteney 1968 Cask Strength and an Ardbeg 1974 Crest Label, 40%.

(Difficulty level: 2.5/5)
In the Stillman’s Cask Selection, Switzerland’s very niche whisky import and distribution company offers a wealth of single malts and Irish whiskeys from renowned distilleries such as Macallan, Springbank and Clynelish. In this edition, we offer you just under a dozen, including a Port Charlotte matured in first-fill sherry casks and an Irish trilogy from 1991.

((Difficulty level: 3.5/5)
Launched in 1995 by United Distillers (Diageo’s predecessor), the Rare Malts Selection (RMS) is a range of 121 bottlings (70 cl, 75 cl and 20 cl) from the vaults of 36 distilleries owned by the group at the time. For thirteen of these, only one bottling was ever produced for the range. Ending in 2005, the selection covers the pivotal period for Scottish malt that spanned from 1969 to 1982. Malts range from 18 years to 35 years. We offer some thirty bottlings, including ten of the thirteen single bottlings.

(Difficulty level: 1.5/5)
Appearing in the same era as the RMS, the Flora & Fauna range was originally reserved for distillery visitor centres but was eventually released worldwide. The first version featured a white capsule, which later became black. The box also changed, beginning with a wooden box and later being released in a cardboard box or with no box at all. The name Flora & Fauna refers to the illustrations used to decorate the bottles, provided by its creators, United Distillers (Diageo’s predecessor). When it was first released, it featured malts from 22 distilleries, with four more added in 2001. Note that Caol Ila is the sole representative of Islay. Malts are aged between 10 and 16 years. Due to distilleries being sold or bottlings discontinued, the most sought-after versions are Rosebank, Bladnoch, Aultmore, Balmenach, Craigellachie and Glen Elgin.

(Difficulty level: 1.5/5))
Located on the Isle of Islay, in the heart of the village of the same name, Bowmore became one of the greatest commercial successes in the Scotch whisky industry in 1963. In 1994, it joined the Japanese group Suntory and underwent massive changes, updating its packaging and releasing a huge array of new bottlings, from single casks, to cask strengths, special finishes, limited editions and vintage expressions. Glass bottles appeared alongside ceramic versions. This meant that in the mid-90s, Bowmore was available in screen-printed glass bottles, before paper labels began being used from the turn of the millennium. We offer three versions from this period, a 12 year old, a 17 year old and a Cask Strength. Note the inclusion of a Bowmore Claret, launched in 1999, an excellent example of bottlings from the start of the 21st century.