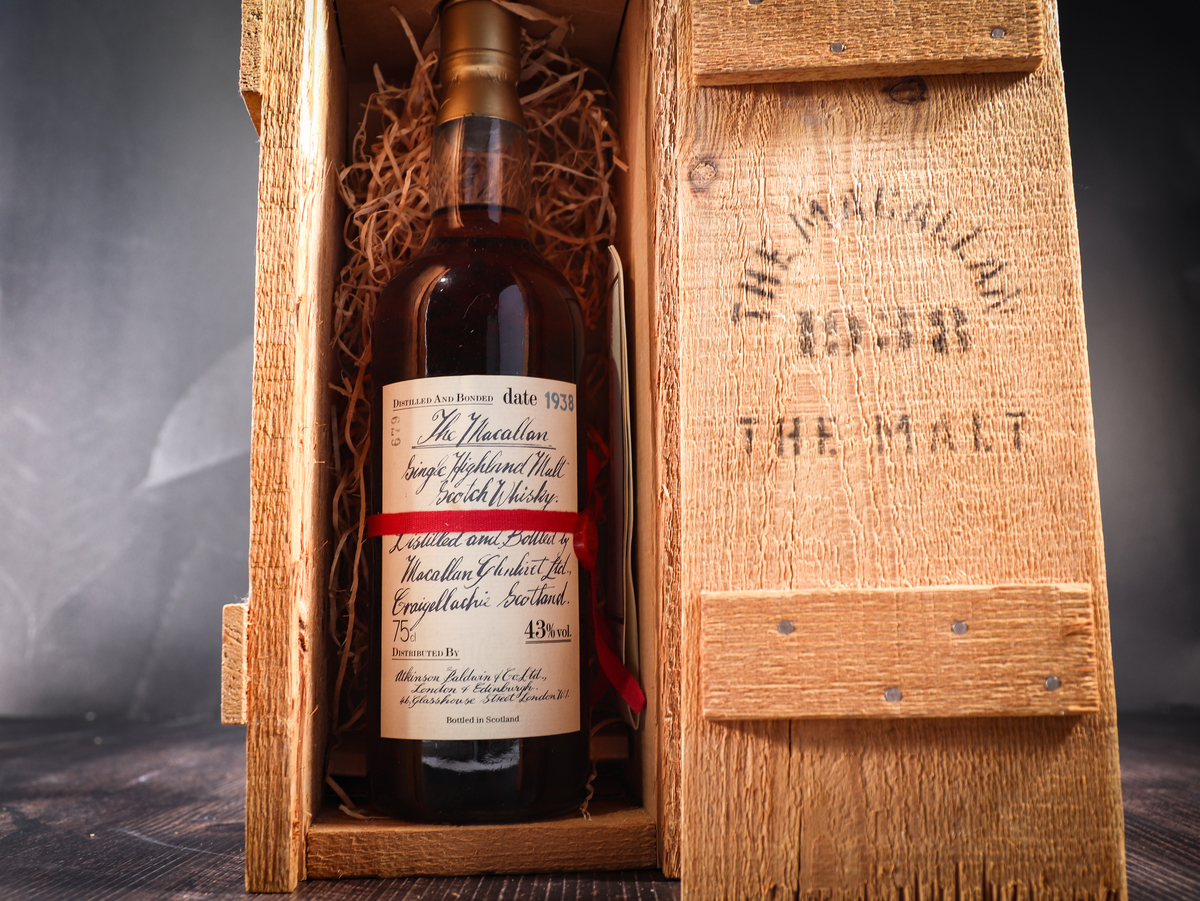 Extreme really is the best word to describe the third edition of Fine Spirits Auction which ended on Friday, 9 April 2021. As the sales go on, each one is different from the last! Gaps are emerging, new profiles developing and choices being made. One thing is for sure though—there was no place for compromise or half measures in this auction. At every turn, it was all or nothing!

The tone was set right from the start with the incredibly well-preserved Macallan 1938 Red Ruban, which unsurprisingly went for its high estimate of €14,160. Hot on its heels came Glenury Royal 1953, which could have fetched a little more but in the end went for the honourable sum of €7,788. Second place, though, was stolen from the Glenury by the mastodon that is Yamazaki 1993 “The Elephant”, which stood its ground to smash its target with a superb final price of €11,800! This is the highest price ever paid for this edition, seeing it beautifully break through a symbolic ceiling for any collectable bottle. In fourth place came Ama The Fisher Girl, a 1977 version of Karuizawa now very rarely found at auction, which quickly widened the gap (€7,700) with the cohort of Karuizawa and Asama bottlings that have been by its side since the start.

This auction also saw great performances from: Glendronach 1972, Sherry Butt 713. The Port Ellen Annual Releases, which failed to find buyers in the second edition of FSA but this time found homes and exceeded their high estimates.

Velier, Velier, Velier, Bristol, Silver Seal and… Chantal Comte! So went the battle between between the main rums in this third edition. The truth is there are never enough! On a more serious note, within the Velier clan, although the Caroni 1991 Carnaval Edition went for the highest price (€2,478), it was the Demerara Rums— Enmore, Diamond, Uitvlugt, Albion and Blairmont that attracted most attention from bidders. None went for less than €500, while some Caronis are still selling for well below that mark. When will it be Skeldon’s time?!

The real surprise, however, was the Chantal Comte 1980 Of. Cask Strength, which fetched €1,050 with no less than 19 bids. A great result!

In the lead-up to the auction we promoted these two ranges whose approaches and spirits are diametrically opposed and who both found their audience during the sale.

Rare Malts Selection : Of the thirty-odd bottles in the auction, all found a buyer. Only two went for their low estimate. All the others fetched a final price within the low and high bracket. Awards go to Brora 20 Year Old 1982 for the highest bid (€1,475) and Royal Lochnagar 30 Year Old 1974 for the number of bids placed (13).

The Stillman’s Dram : The Stillman’s Dram: This auction was a great success for this range and its much-loved bottlings, particularly for its Irish whiskeys, which inspired a heated battle with more than 66 bids for four versions, including Siobhán 27 Year Old 1989 The Stillman’s (20 bids) and a winning bid of €401, well above the high estimate.

NO EXCEPTIONS FOR JAPAN!

You could be forgiven for thinking that, in the world of whisky, anything bearing the name “Japan” has been touched by a sort of natural grace and that just the mention of this magic word is a gauge of quality and authenticity, two vital attributes when auctioning a bottle.

Although Japan continues to enjoy a very positive reputation among enthusiasts—collectors and consumers alike—it has to be said that in Japan, as elsewhere, looks can sometimes be deceiving, and that’s never truer than in the testing conditions of an auction.

The appearance in local markets of a wealth of brands of pure malts and blends over the last five years has raised a number of questions and led the industry to reflect on what Japanese whisky really is. The positions adopted and announcements made by the Japan Spirits & Liqueurs Makers Association just before the third edition of Fine Spirits Auction clarified various traditional practices and set out a more restrictive framework for an official designation of “Japanese whisky”.
For those who had identified this segment as a potential starting point for developing a collection, the result could leave a bitter taste.
Ironically though, application of this new legislation, which came into effect on 1 April (and no, it wasn’t a Japanese April Fool’s joke), will automatically make these brands collectors items. Their labels pay testament to a practice now lost as it no longer meets the specifications of the new “Japanese whisky”. Making them all the more valuable...
When it comes to Japanese whisky then, there will be a before and an after 1 April 2021!

For both Scotland and Japan, values tend to increase for single malts displaying the same name as the distillery where they were created, limited editions and/or single casks, often vintage or aged, with a profile marked by sherry, peat or a particular finish. Exceptions are made for blends and pure malts like Hibiki and Taketsuru.

In this third edition, the gap widened between Japanese single malts and the category of blends and pure malts.

The former—launched into orbit some ten years ago—seems to be evolving with no limit on the prices it can reach, as seen in the winning bids for Karuizawa 1983 White Warroir (€6,962) and Yamazaki 18 Year Old, which continues to increase in value (€700). The newest distilleries, Chichibu included, have confirmed their position and seem to have reached an initial plateau (€800 - €850). Although their values are increasing at a slower pace, they are no less solid and healthy. This makes them a real hotbed of future value affected only by differences in the quality of maturation from one edition to another.

The second category of pure malts and blends is less predictable. It’s important to distinguish between the two sworn enemies Nikka Whisky and Suntory—who, whatever the whether, always hold the same position (Taketsuru) and sometimes even improve it (Hibiki)—and lesser known producers and their brands, such as Kaiji, Kamiki and Koshu. Interestingly, the blends from Ichiro Akuto (owner of Chichibu and creator of the famous Hanyu Malt Cards Series), Wine Wood Reserve and Double Distilleries were all overlooked in this edition.
Next time!

Find the report of the third fine spirits auction